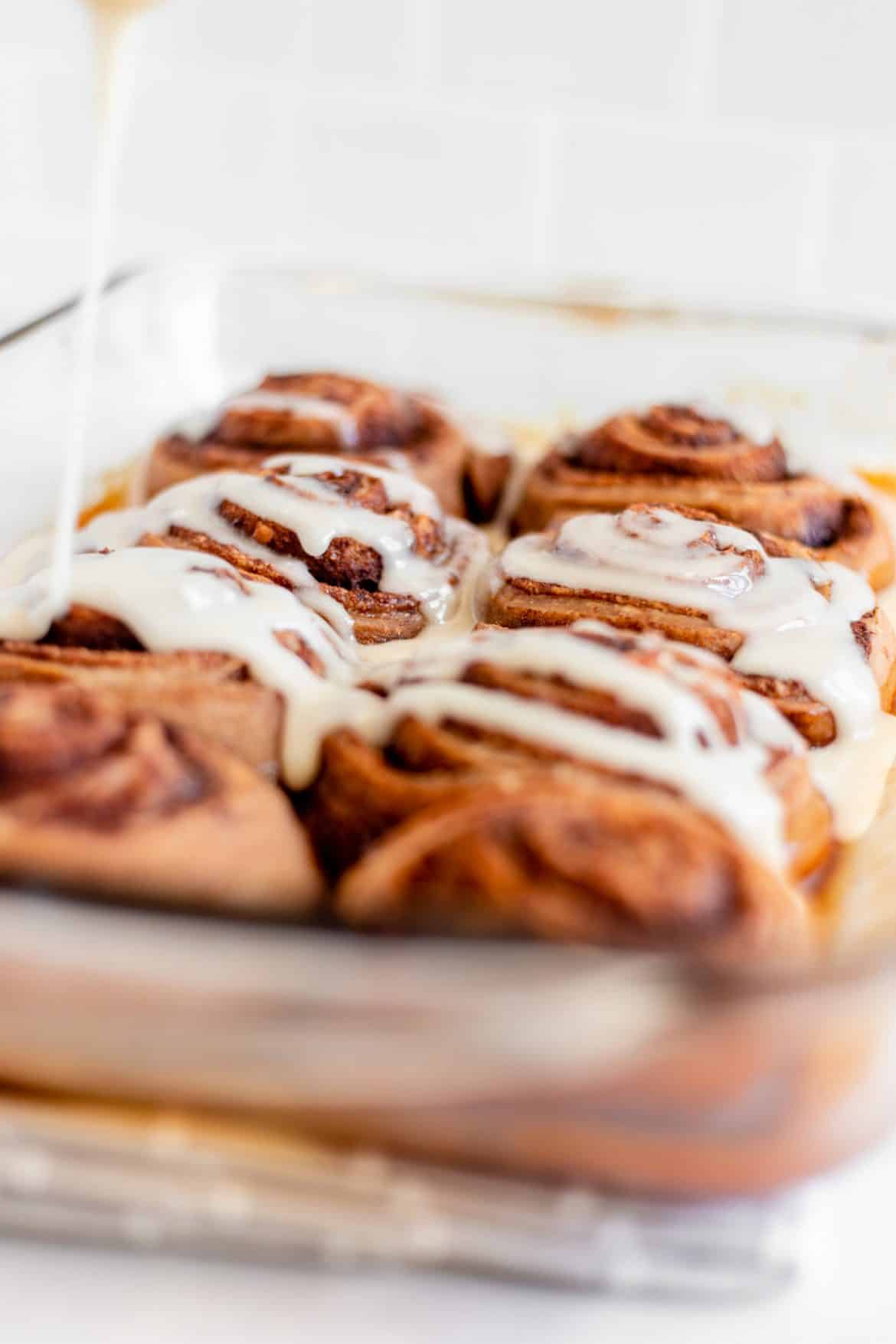 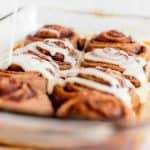 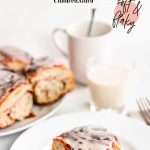 We love to create delicious breakfast recipes with gut health in mind. If you’re looking for a healthy and vegan cinnamon roll recipe, it just doesn’t get better than these homemade sourdough cinnamon rolls! The flavor is incredible and since these are made with sourdough, they’re easier to digest.

How to Make Cinnamon Rolls from Scratch with a Sourdough Starter

When it comes to bread products, sourdough is the best. It’s easier to digest, it’s more flavorful and the airy texture is wonderful! I started out thinking I’d make a sourdough cinnamon swirl loaf, and that quickly evolved into cinnamon rolls. The sourdough flavor pairs with the sweet cinnamon swirl flavor so well, and I love it. I know sourdough products take a bit more time and care, but the delicious taste is WORTH IT.

When making sourdough products, it’s all about the stretching and folding, and the rise times. You start with a dough ball, let it rise, then stretch and fold (steps covered below) three times over the course of three hours. Let me tell you again, the wait is so WORTH IT.

Pro tip: I like to put my covered bowl of dough on top of my electric heating pad to speed up the rise times between the stretches and folds. The warm temperature promotes the yeast to produce carbon dioxide faster, resulting in more air pockets and rise in a shorter time span. It’s like a cheap version of a proofer, so if you’re fancy and your oven has a proof setting, obviously use that.

We love to create delicious breakfast recipes with gut health in mind. If you’re looking for a healthy and vegan cinnamon roll recipe, it doesn’t get better than these homemade sourdough cinnamon rolls! The flavor is incredible and since these are made with sourdough, they’re easier to digest.

Baked this the first time and followed the recipe exactly! Came out amazing and loved it! Baked it a second time and decided to switch out the sea salt for a pumpkin spice salt I had on hand. During the ride time this time, the dough did not rise at all. I continued the process of kneading and waiting, but still no rise. Could switching out the sal make that much of a difference?

How was your starter? was it active and bubbly? It might have been the salt, it depends on what other ingredients are in it. I’m going to update this recipe to use weight measurements for more accuracy.

These were some of the best cinnamon rolls I’ve had! Also really love that they’re easier to digest. Usually sweet things like this really bother me for breakfast but these didn’t.

I like that this recipe can be made in a day. Found this recipe because it is labelled vegan but there an egg in it….I used 1/4 c of aqua faba instead, soy milk and earth balance butter. Beautiful dough. Added a little bit of baking powder and baking soda just before rolling the dough because I wasn’t sure my starter was strong enough but I don’t think I needed to. Could only fit 6 in spring form pan of 9”….they were quite big. Quite yummy. The first sourdough cinnamon bun recipe that turned out for me. Impressed and pleased. I plan to make this again. Thanks for posting. 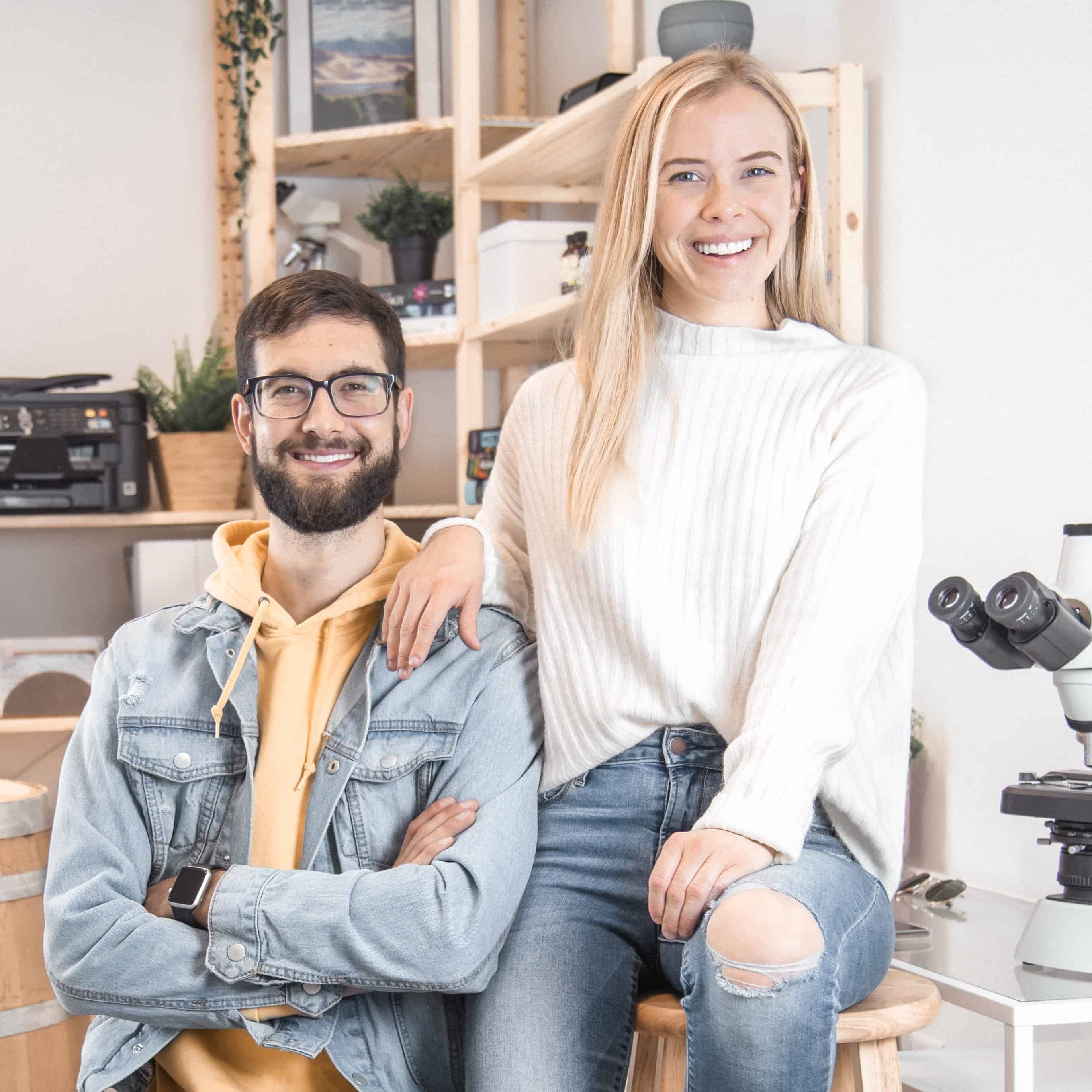